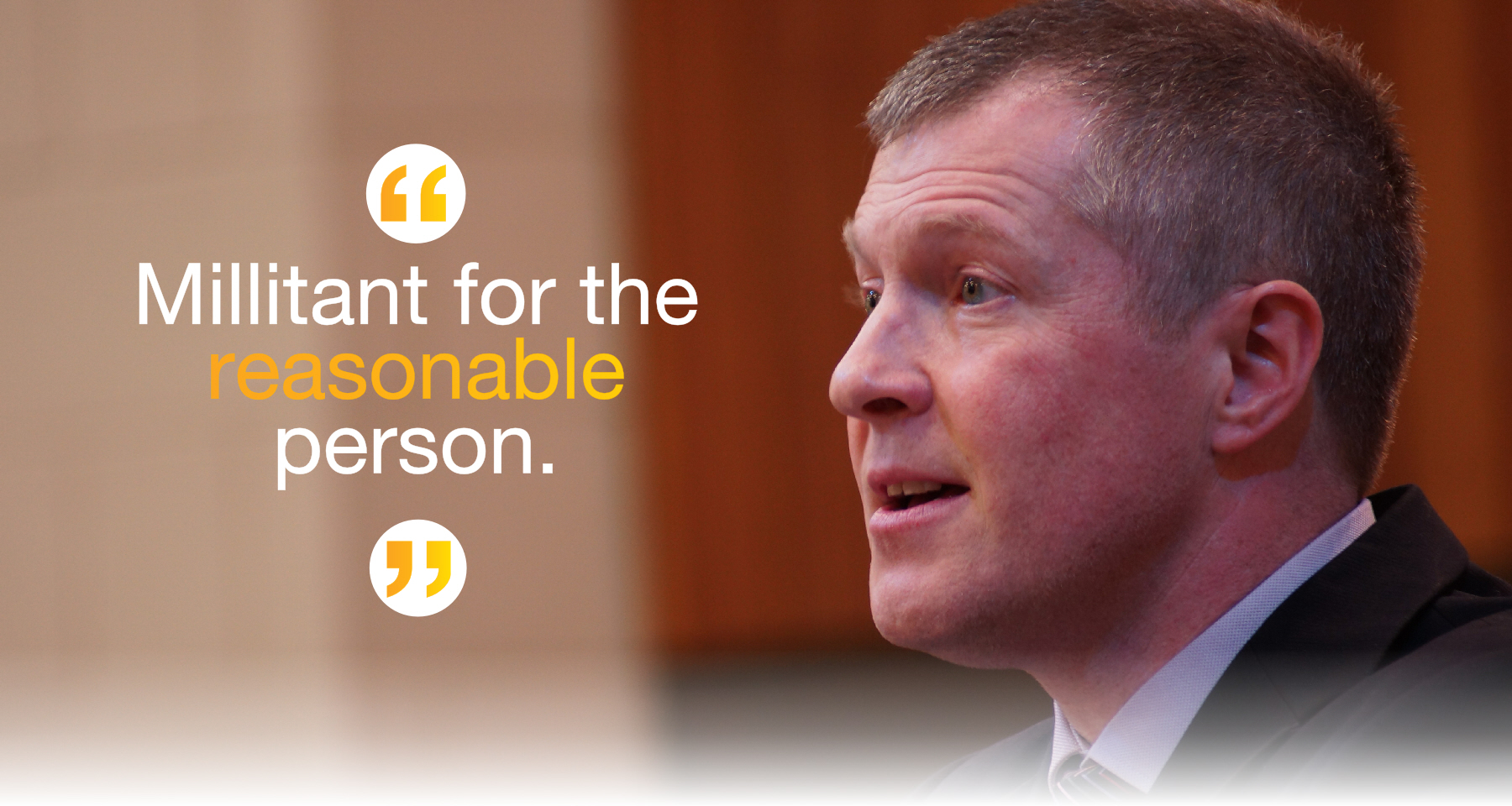 On Sunday, I was pleased to be invited to address the congregation at St John’s Church in Edinburgh. My speech was a little bit different from the usual contributions from the pulpit but it seemed to go down well! I told them about my grandfather – a minister in the Church of Scotland.

I spoke about my family background and how my closest relatives helped shape my own political outlook.

I spoke of the challenges facing my party and the values that drive liberals to try and make a difference. Have a read for yourselves. This is what I had to say:

Thank you for inviting me to address you this evening after your service.

My grandfather was a minister in the Church of Scotland and although I never witnessed one of his services I know he would never let a politician anywhere near the pulpit.  So I commend you for taking this brave step of allowing me to speak this evening.

But that is not the only reflection of your bravery. That you proudly display your values through your membership of Changing Attitude Scotland which is working to end prejudice and discrimination against LGBT people is wonderful.

Your support through the debate on marriage equality was a cornerstone of that campaign and reassured many Christians that it was respectable to support equal marriage.

Showing that tolerance, faith and love are comfortable allies not a threat to one another, and you deserve credit for promoting that.

But it is also wonderful to see you exhibiting your faith through work on social justice.  Your links with Ghana and Ethiopia.  Your peace and justice centre.  Your provocative murals.  These show your commitment to your faith.

The words from a sermon in this church earlier this year appealed to me:

“Let us build a house where hands will reach beyond the wood and stone to heal and strengthen, serve and teach, and live the Word they've known.”

That this fine building is a home to such tolerance and understanding fills me with great hope. So thank you.

I didn’t know it growing up, but I was raised a liberal. Like this church, like you, I was prepared to stick out, standing up for what I thought was right and prepared to be awkward.

My mother described me as a “spirited child”. I know for sure that my three older sisters definitely agree with that one. And they still do. Although there is no strong political tradition in my family, public service was important.

My dad was the local shopkeeper and session clerk of the kirk for three decades in the village of Strathmiglo. He ran the village hall for a long time too.

My mother was secretary of the community association. She helped with Meals on Wheels and wrote the village newsletter.

My grandfather was the minister. He organised local operettas which people still talk about today – five decades on.  He was a bit of pioneer too – building his own TV sets – the family had the first TV in the village complete with door handles for the tuner control.

We lived above the shop at the centre of a vibrant village in Fife., the harvest thanksgiving, flower show, highland games, Sunday school and a lot more - and the liberal values that I still hold dear were formed there:

Opportunity, community, sustainability and an open mind.  Good liberal values.  I was a liberal but did not know it and as I got older, I was interested in exploring capital L liberals.

Yet that the Liberals were forged through an alliance of radicals, free traders and reformers has always felt instinctively right for me.

Look at what they achieved.

Gladstone was an advocate for “peace, economy and reform” and introduced universal elementary education, reform in Ireland, land reform, co-operation rather than conflict in Europe and broke down trade barriers to grow the economy.

The Campbell Bannerman/Lloyd George/Asquith Liberal Government delivered the state pension for over 70s, free school meals, labour exchanges, unemployment insurance, health insurance and more. To pay for these social reforms higher taxes were levied on higher incomes and land tax was introduced. And it curtailed the power of the House of Lords which was determined to block the people’s budget.

My late friend Charles Kennedy would often say that the way ahead can be found in the history books.

We have always understood that the country needs economic and social liberalism and we understand the relationship between the two.  The shift from Gladstone Liberalism and his emphasis on economic reform to break the old economic establishment to Campbell Bannerman and his social priorities to give workers the opportunity to improve their condition was made within one party.

Today we are best placed to get that balance right too as we understand the relationship between economic and social liberalism rather than the plunging, volatile swings from left to right.

We understand the need for constitutional reform.  Just like the great Liberal Government of the early 1900s won the battle over the People’s Budget with the House of Lords we will win the modern battle with the Lords over its abolition.

We will also win voting reform, federalism and a written constitution.

The modern establishment or the two old parties of Labour and Conservative are losing their dominance of our political system.  Where they once secured 98% of all votes they now struggle to secure 70%.  The protection by the establishment of its privileges will come to an end.

That is why our foresight on climate change, energy security and food leads us to advocate long term solutions.

We are a party of economic, social, constitutional and environmental reform.  We want change for the long term and for our neighbours rather than just ourselves.  We see the value of altruism, that sense of fairness and opportunity for everyone whatever their background.  We want to challenge the establishment, the orthodoxy, the way it has always been.

Those values and beliefs were at the centre of our party because of the prevailing winds of human nature since 1859 and before that with radicals and reformers.

And the prevailing winds of human nature means that a voice for those values is required today too.

I am inspired by politicians of recent times. David Steel is marking 50 years in parliament this year and over those years he has been a radical reformer. He led on abortion, apartheid, home rule and breaking the mould of British politics.  Our country is very different thanks to David.

Yet it is the manner in which he delivered change that impressed me even more. The title of his biography “Militant for the reasonable man” sums up his mission, style and manner.

That is the mission, style and manner I want to rekindle today.

It was the style that Charles Kennedy nurtured too.  That gentle Highland lilt shielded the radical and reforming nature of his message.  “A party of conscience and reform” was how Charles described the party.

His pro-European, pro migration, pro home rule, pro education instincts were radical for many but made palatable by his gentle manner and style.

But it was his quiet but resolute opposition to the war in Iraq that secured support and respect from many including political opponents.

Shirley Williams, Jim Wallace, Ming Campbell and, I would argue, Nick Clegg all adopt a similar manner.  Although I never met him Jo Grimond’s belief that liberalism was a way of life as much as a political party resonated as a voice for the party.

It is that blend of how we do our politics and our political beliefs themselves that is critically important.

That resolute but polite defiance in the face of intransigence is inspiring.  It is not the hot bloodied and fiery rhetoric that motivates my political soul.  It is the quiet, understated determination that piques my political interest.

Sometimes pitching against the wind.  Standing alone when the societal pressure tells us not.  Speaking quietly with a point to make.  That liberal style, that liberal way of life is for me.

Opportunity, community, sustainability and an open mind. Good liberal values. Values shared by great liberals like the late Charles Kennedy and Lord Steel, but also by people across Scotland. We are radicals, but the power of our case means we appeal to your ears rather than shout in your face. We are the party which is militant for the reasonable person.

Those great liberals of the distant past and recent past have inspired many. They have shaped where we are now as liberals and Liberal Democrats.

Like all political movements there have been high tides and low.  The division over Ireland, the Boer war, the post war collapse, the Jeremy Thorpe trial and the post-merger period have all been challenging times for the liberal movement but what is consistent with each is the recovery of our fortunes that followed those events.  So if I may just briefly reflect on our current political status.

Since May the new Conservative only government has paraded its intention to introduce a Snoopers’ Charter, abolish the Human Rights Act, end of onshore renewable wind and solar support and deliver £12billion of welfare cuts.  It has acted with unhelpful hyperbole over the difficulties at Calais.

Five years in government was tough for the Liberal Democrats but not half a tough compared with those who are suffering under the Tories now.

That Liberal Democrats saw that this was our role and responsibility makes me proud to be a part of it.  Putting people, before party.  Others before self.

And that is what we will do as we embrace the next electoral expression next May. If I can modestly say I think my small team in Holyrood are pound for pound the best parliamentarians in the Scotland.

We are powerful voices for liberalism in Scotland.

Whether it’s on early education for our children to give them the best start in life, or it is standing up to the Scottish Government on the Dalai Lama or Russia, whether it is speaking up for college places, or those with mental illness who deserve just as much support as those with physical illness, or on the police.

The police service that is overusing stop and search especially on our children or permits police carrying guns on the streets of Scotland routinely. It is my team of Liberal Democrats who have provided that liberal voice when others were silent.

And we have a new leader in the UK in the shape of Tim Farron to give a fresh voice to those values. He and I have some shared similarities of background. We are both from small towns, from modest backgrounds. We have both been committed all our lives to the Liberal cause and public service.

And we are both charged with leading our parties. In his first speech as leader, Tim explained how he grew up wanting to be in a party that had something to offer “people like us” from modest means.

You will have heard in that the echo of the liberal vocation, the liberal mission through the ages. My mother was right.  I was a spirited child.  I still am.

That spirit for liberal values is shared by my colleagues in the Liberal Democrats.  That spirit is shared by the thousands of new members that have joined our party since the general election.

They know we have people to speak for, values to protect and missions to complete.  That’s why they have joined our movement – without even being asked.

Find out more about Willie's values & vision for Scotland. Sign up today: