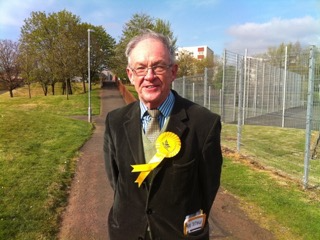 Austin Reid’s involvement in politics started as a founder member of the Liberal Society of Queen’s University of Belfast, at a time when the Liberal Party of N Ireland sought to provide a middle democratic ground between the antagonisms of Unionism and Republicanism. He left Queen’s with a PhD in artificial intelligence

Since 2015, he has been the Secretary of the Central Scotland Liberal Democratic party and stood for the Westminster seat of Falkirk in 2017.

He has contributed to the development of further and higher education in England, in Scotland, Mexico, Malawi, and Hong Kong. As Director of consultancy firm ‘WBL Consultants’ he led a World Bank funded project culminating in a new university in the Royal Kingdom of Bhutan,

He has lived locally since 1992. He is actively involved in the local church, a member of he community council, and the founding secretary of the Falkirk branch of the University of Third Age (U3A).

He is concerned at sectarianism and nationalism in Britain, in Europe and in the USA; an approach which replaces reasoned dialogue and cooperation with antagonism. Also with the increasing tendency in society to concentrate on me and I rather than on we and us, to the detriment of community cohesion.

In local terms, he wants the voice of the local community to be heard. He is from Bo’ness and is concerned that the current review by Falkirk Council of its property throughout the Council area may lead to the impoverishment of the outlying area at the expense of the centre. The identity of the many local communities throughout Falkirk need to be protected and enhanced.