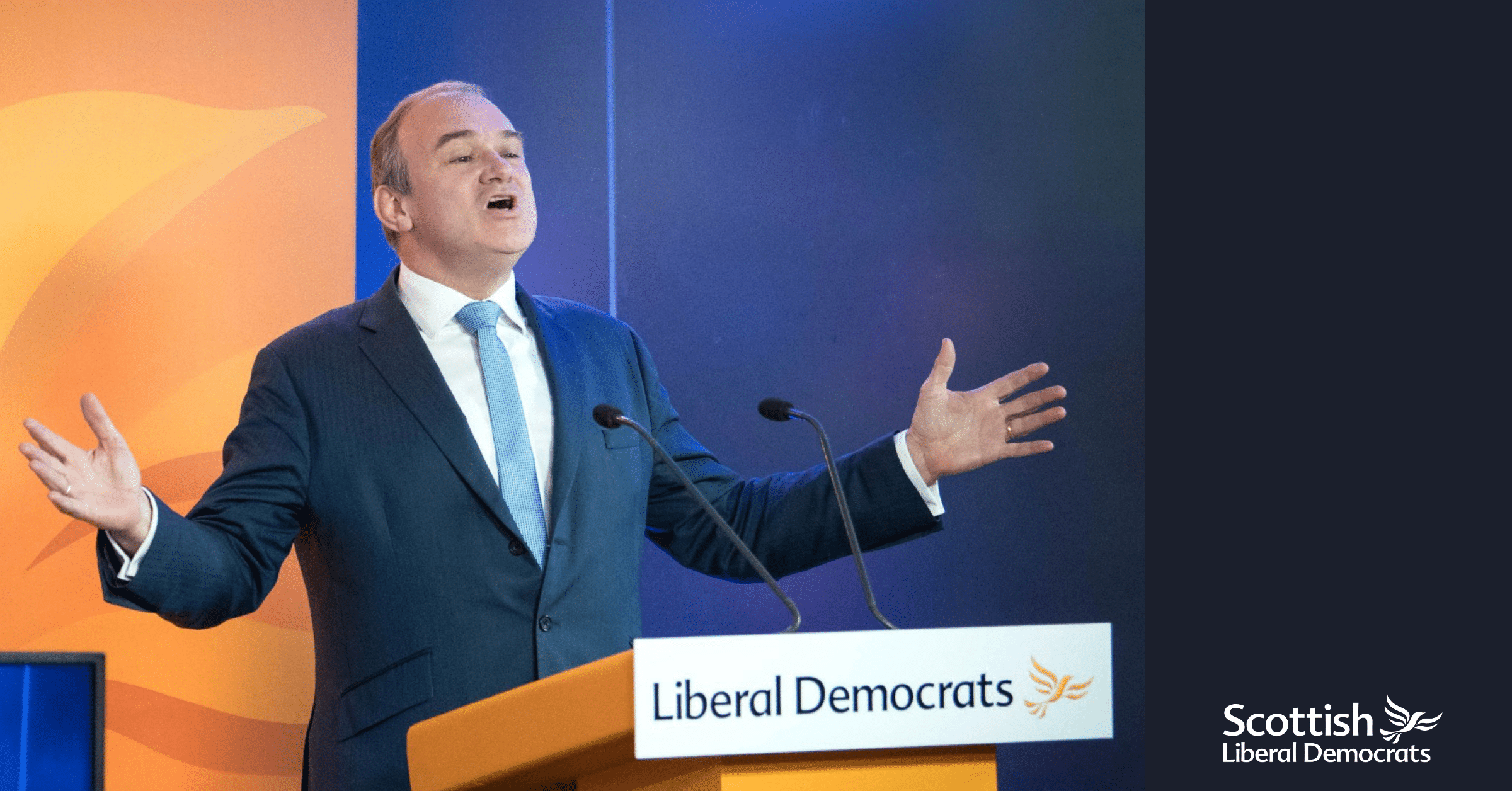 And thank you Molly for that kind introduction.

One of the things that gives me great hope for our party is seeing so many brilliant rising stars – and there’s no doubt that Molly Nolan is one of the brightest.

That’s why we must get Molly elected to the Scottish Parliament in May, so she can put her energy and dedication to work for the people of Caithness, Sutherland and Ross

So thanks Molly. We’re all behind you 100 percent.

It’s a huge pleasure to speak to you today – even though we sadly cannot be together in person.

I did get the chance to spend some time in Scotland a few weeks ago, when I visited Fife Zoo as part of the Listening Tour I’ve embarked on since becoming leader.

I met Briony and Michael, who took over the zoo in 2015 and have built it up into a successful small business.

A place where children and adults can meet zebras, lemurs and meerkats – and learn about the importance of biodiversity. A sanctuarfor endangered species.

Lockdown wasn’t easy for this young couple and their young zoo. With no visitors – no income – but all the usual costs of feeding and looking after the animals.

But they kept going, getting the zoo ready to reopen – Covid-safe – at the beginning of July.

But just days after they opened their gates, Briony and Michael were dealt another blow, when the indoor soft play area was destroyed by a fire.

They evacuated the zoo and got all their animals to safety. But they had to watch, powerless, as a crucial part of their business went up in flames.

It would be enough to break anyone’s spirit. But not Briony and Michael’s.

They reopened – again – and have worked incredibly hard to save their zoo in the face of both a devastating fire and a global pandemic.

It’s not over yet, of course.

Listening to them and so many others describe the enormous challenges and uncertainty they are facing, it is clear that the UK and Scottish Governments must work together to give far more support to small businesses – especially in the tourism and hospitality sectors.

This urgent need for working together, is why Willie Rennie and I, along with Jane Dodds and Stephen Farry, Deputy Leader of the Alliance Party, our sister party in Northern Ireland, wrote this week to the Leaders of the Governments of the 4 nations of the United Kingdom, calling for a 4 nation summit, to deliver a joint approach on the pandemic in the run-up to Christmas.

Coronavirus is causing terrible hardship and anxiety for families and businesses. For everyone we need to rescue a festive period as near normal as possible. And given millions of people usually travel at this time, across our family of nations, a more co-ordinated approach is desperately needed ahead of Christmas.

And I am determined that not only will we get through this, together, but also that the Liberal Democrats will lead the way to a fairer, greener, and more caring society as we do.

A country that offers real hope and opportunity for everyone, wherever they live. With Governments across the UK working together to support businesses and create jobs.

An economy boosted by new green industries, with hundreds of thousands of good green jobs.

And a society that for the first time properly recognises the vital role played by carers.

At our Federal Conference last month, I pledged to be the voice of the 9 million carers in our country.

This is very personal for me. You see, I’ve been a carer for much of my life:

First as a teenager: nursing my mum during her long battle against bone cancer.

Later for my Nanna: organising her care, trying to make her last few years as comfortable as we could.

And now, as a father. As Emily and I care for our disabled son John.

I know just how rewarding and full of love life as a carer can be. But I also know that it is often relentless and exhausting.

And I know that, for far too many politicians and policymakers, carers are all too often an afterthought.

Just look at the abject failure of both the UK and Scottish Governments to protect people in care homes.

The lack of tests and PPE.

The way hospital patients were moved into care homes to free up space, without being tested for coronavirus.

Care homes and carers: too often an afterthought.

But not for us.

I’ve been proud of the leadership Willie Rennie has shown, pressing the First Minister to provide testing and support for care home visitors.

Trying to make it possible for family carers to spend quality time with their loved ones after months of separation.

And Alex Cole-Hamilton’s work championing Scotland’s 800,000 carers – almost nine out of ten of whom say that the pandemic has made their lives harder.

Liberal Democrats standing up and speaking up for carers – in Edinburgh, in London - across our family of nations.

This is a great example of one of the biggest strengths of our party: our federalism.

We are all united as Liberal Democrats through our principles and our values.

And we work together - in close partnership.

I benefit hugely from Willie’s wisdom and experience, just as I do from Jane Dodds in Wales and Liberal Democrat leaders in local government across England.

But we also understand that each nation, region and community must often respond to its own challenges in its own way.

Not pulling away from each other or constantly battling, as if for one part to prosper another must fall.

But also not pretending that there is some one-size-fits-all solution to be handed down from Whitehall or Bute House.

Unity does not mean centralisation.

Devolution does not equal division.

And yet, one of the things that has made me angriest in recent weeks is the way our Governments – in Westminster and in Holyrood – have sought not to bring people together to solve this crisis, but instead to use the pandemic to divide our country.

I’m sure it serves their egos and their narrow political interests, but it certainly doesn’t serve the families and businesses who are struggling just to make ends meet.

“A kingdom divided in itself cannot stand,” the saying goes.

That’s why – in times of national crisis like this – it’s the job of true leaders to bring people together, not push them further apart.

Since March, we have seen countless examples of the people across the UK pulling together:

neighbours bringing food and medicines to those who are shielding or self-isolating.

The heroism of NHS staff, carers and key workers in the face of extraordinary challenges.

sacrifices we have all made, every single day to keep each other safe.

Just imagine if our Governments had demonstrated that same sense of unity, of common purpose and co-operation. Imagine how much better their responses would have been.

The truth is - this pandemic has exposed that the way the United Kingdom currently runs, is not fit for purpose.

But the answer cannot be to tear it apart.

Friends, I can understand why people would seek any alternative to life under Boris Johnson’s cruel and incompetent Tory Government.

But whether it takes four months or four years, Boris Johnson will be gone. The shared history and values of our family of nations - fashioned over centuries - will endure.

And so it falls to us, as Liberal Democrats, to offer a better way forward.

We must offer an alternative to both the dishonest, embarrassingly incompetent Conservative Government in Westminster and the failing SNP Government, distracted by its pursuit of independence from serving the real interests of the Scottish people.

So we must also offer a new future - a federal future for our United Kingdom.

A genuine partnership of nations and regions, that gives individuals more control over their own lives.

So I’m delighted that, when I’ve finished speaking, you will be debating new ways to build and strengthen that partnership.

Throughout the history of our country and our party, we have seen that the most innovative thinking about how to reform the United Kingdom comes from the nations and regions, not from the centre.

So I look forward to hearing your ideas and working with you to make them a reality.

And I look forward to working with Willie and all of you to send Molly Nolan and many more Liberal Democrats to Holyrood in May.

To reject more division and instead put forward a positive partnership.

To work for a stronger Scotland and a better United Kingdom.

To keep the next Parliament focused on the priorities and concerns of families across Scotland, not fixated on another divisive independence referendum.

Carers, young people, those who have lost their jobs, the climate... none of them can afford to wait while we spend years arguing again about independence.

So let’s make sure they have a Scottish Government that delivers the jobs, schools, hospitals and other services that the people of Scotland need.

Let’s do it by working our socks off to get more Liberal Democrat MSPs elected in May.

More Liberal Democrat MSPs to champion mental health care, so children don’t have to wait more than a year to get the support they need.

More Liberal Democrat MSPs to stand up for real action to tackle the global climate emergency.

More Liberal Democrat MSPs to support Scottish businesses, at a time when so many jobs are on the line.

More Liberal Democrat MSPs to offer a better way forward for Scotland. And for our United Kingdom.

Thank you. And good luck!